From the Anandtech article...last paragraph is interesting. 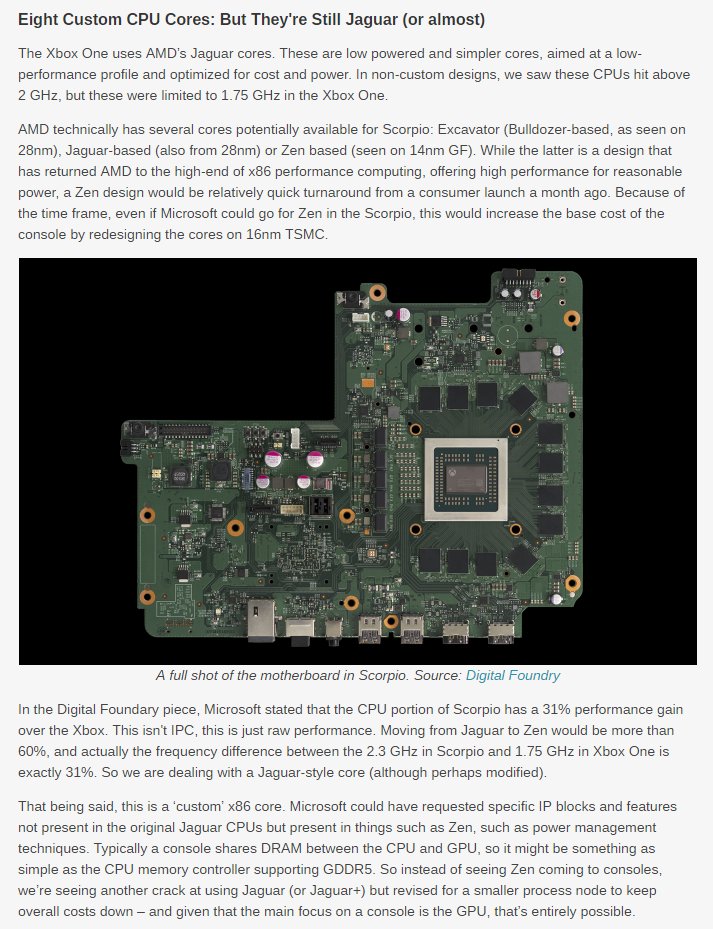 Why even do tech breakdown without access to the hardware?

The MS Scorpio site has been updated again...looks sleek.

Why does the site make me think it will be $599? They stress premium components much like a luxury car maker.

Anyone else notice no one else is talking about VR w/ Scorpio? Guess that's not in the cards, or what?

Pureshooter said:
Why does the site make me think it will be $599? They stress premium components much like a luxury car maker.
Click to expand...

Pureshooter said:
Why does the site make me think it will be $599? They stress premium components much like a luxury car maker.
Click to expand...

Microsoft already tried seling a $500 console. I doubt they they try it again.

$499 is the absolute max. I expect a $399 barebones i.e. no controller and no pack-in.
Toggle signature
Help support our site by shopping at any of our affiliate stores. Click here to view our affiliates!

Mcmasters said:
Anyone else notice no one else is talking about VR w/ Scorpio? Guess that's not in the cards, or what?
Click to expand...

I'm guessing E3 for that.

Rollins said:
From the Anandtech article...last paragraph is interesting.

I though DF said it WAS 16nm....
Reactions: sykokila

Mcmasters said:
Anyone else notice no one else is talking about VR w/ Scorpio? Guess that's not in the cards, or what?
Click to expand...

I'm going to guess that they, perhaps, haven't told us everything yet. Maybe there is some kind of big event coming that would be ideal for those kinds of announcements... Not sure...

What would be awesome is if they hide it in a Hollow Shell of an Xbox One s and lift it off like they did with the 360 years ago
Reactions: Registered User 1

Frozpot said:
I'm going to guess that they, perhaps, haven't told us everything yet. Maybe there is some kind of big event coming that would be ideal for those kinds of announcements... Not sure...
Click to expand...

i thought i read/heard that as well

No media bias at all from N4G

Rollins said:
No media bias at all from N4G

Like I said..the mainstream media sucks. There's a reason why Xbox fans avoid gaming sites like the plague.

Rollins said:
No media bias at all from N4G

All they do is post stories from other sites. I think all this means is Sony fanboys (maybe) are making those stories "hot" and pushing them to the top.


Edge BC said:
There's a reason why Xbox fans avoid gaming sites like the plague.
Click to expand...

Good lord....just got caught up on the past 15 pages of posts in the Scorpio 4.0 thread, and that was turned into a huge s*** show. Pathetic.I hope 5.0 is an improvement, but I suspect not.

Anyway, at least we know Forbes is always consistent:

Remember: Xbox Scorpio Won't Have Any Exclusives At All

As Paul Tassi noted the other day, it didn't take long for the conversation about the Xbox Scorpio last week to take a distinct turn. For a few moments, it was all about the raw power of what appears to be a deeply impressive machine, albeit one without a price point. Moments later, the "software drives hardware" mentality took over, and people began once again talking about how all that power goes to waste without the games: as Sony has been showing recently, console exclusives are still potent motivators in an era of multiplatform blockbusters. Tassi made an important point: Sony's lead in the exclusive race right now is now a massive chasm, and we shouldn't expect Microsoft to catch up in a few short months. But we should also remember another thing about the difficulty the company will have using exclusives to support the Xbox Scorpio: it won't have any.

This isn't to say that it will have bad exclusives, or that it won't have big, headline-generating exclusives, but that it will literally have no exclusives. Remember, the entire point of these mid-generation upgrades is that they will play all the same games as their older predecessors. So there can be no games that run on the Xbox Scorpio only: they also have to run on the Xbox One, as well as the PC. It is not a quibbling point. Not only does it mean that all of Scorpio's power has to go things like resolution, frame rate and load times instead of more fundamental improvements, it also means that it's impossible to put some marquee exclusive up on a pedestal and use it to sell the new machine. Any attempt to say: "see how good this game looks on Scorpio" has the side effect of saying: "this doesn't look nearly as good on Xbox One, does it?"

It's the essential difficulty in marketing these now-extended product lines. The companies involved need to strike a balancing act between elevating the new hardware and denigrating the old while still ensuring that all games look good and run well even on the older machines. This is less of a problem for Sony, which is using the PS4 Pro for differentiation in an already dominant product line. If people want to spend the extra money on a more powerful machine, the logic goes, let them. It helps keep the company a bit (a bit) more relevant to techies and offers the PS4 line a little more flexibility. Microsoft, on the other hand, has loftier goals. The Scorpio is meant to complete the company's rebranding as a gamer-first operation and to allow it to claim a place at the top of the ziggurat for console hardware. Unfortunately, exclusive software can be of limited help at best in this quest.

I'm not saying the lack of exclusive software will make it impossible for Microsoft to sell the Scorpio, just that it's a pretty unworkable angle. Instead, the best angle the company has mirrors what we saw with the PS4 back at launch, when both machines had a small handful of relatively uninteresting exclusives. Rather than selling on the strength of Knack, people found themselves very interesting in the fact that multiplatform games looked better on the PS4, and at a lower price point to boot. While the price won't be lower, it seems that multiplatforms will definitely look better on Scorpio: that's the best way to sell that power.

As both Sony and Microsoft look to the PC world for cues on upgrade cycles, so too should they look to the PC world on how to sell graphics. Nvidia has been selling cards without exclusives for a long time now, and at a higher price point than consoles will ever touch. The calls for good exclusives on the Scorpio miss the point that Microsoft's strategy dictates that there will be no exclusives on the Scorpio. Something to keep in mind.
Click to expand...

One of the worst articles from Forbes yet.

Anyone who doesn't believe there is a massive anti-MS sentiment in the media is living in denial.

What is the matter with these websites? Have they gone mad?

I just can't get over how one site MS paid DF to say good things about the hardware?

I have been around for a very long time but this is by far the worse generation I have been in.

WTF is wrong with these people?

They talk sh*t on xbox one for 3 years and then they call DF over and all of sudden they get upset because they didnt get the invite?

You expect MS to send an invite after YOU tashed them. Then get up set because they didn't include you?

This is the reason why TXB was born because this happened back in 2000 but no where like this.
Last edited: Apr 10, 2017

MS is the polar opposite of Apple. Apple rips out the headphone jack, and people love how the company is forcing them to upgrade.

MS gives you a more powerful OPTION and they get crapped on. People who want one company to eliminate the other need to have Madden get stuck in their console and be the only game they can play. Take a good look at what zero competition does for gaming.
Reactions: GordoSan